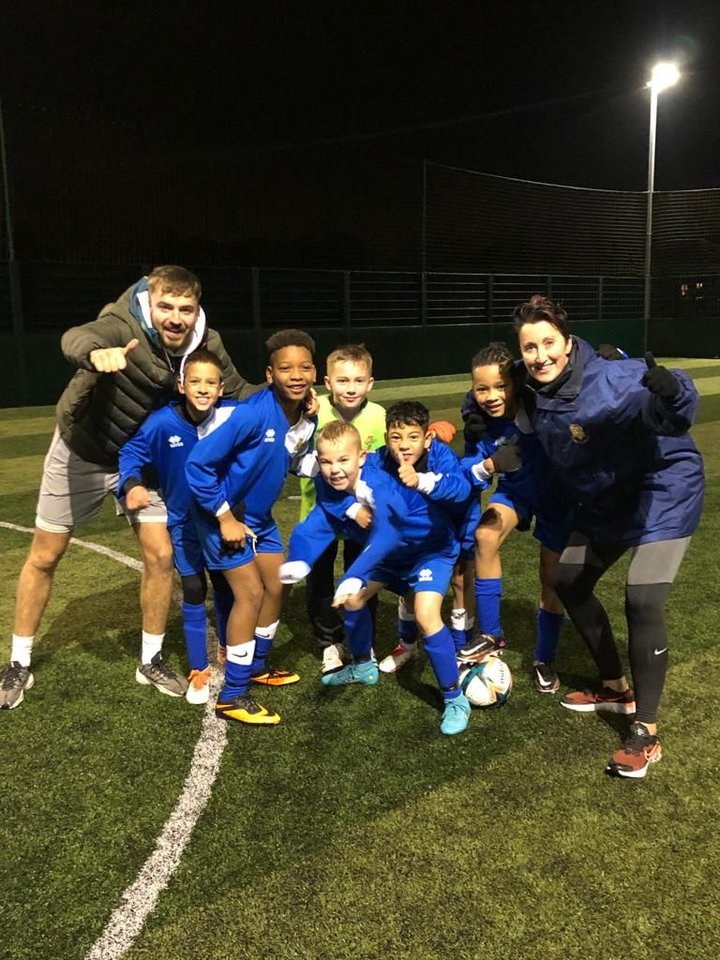 Paget pip Short Heath to Trophy in humdinger of a final; night of drama lapped up in the rain by twelve hardy teams.

On a cold and rainy Wednesday evening at Yardley 5’s Football Centre, Paget reigned supreme in retaining the ESPSFA Trophy they won a year ago after an enthralling tournament in which twelve schools contributed to the drama.
Last minutes changes both during the day and just as the tournament was set to kick off meant that one group of five and two of four set out to lift the first trophy of the season.
Short Heath, Rosary, Marsh Hill – making their ESPSFA bow – and Heathlands made up Group A which was won resoundingly by Short Heath. Heath reached the quarter finals plundering 17 goals along the way and conceded only two, those were to Rosary in a 5-2 win. Rosary, as runners-up and Heathlands as one of two best 3rd placed teams, joined Heath in the last eight.
Group B, pitted St Bernadette’s, Timberley, SS Peter and Paul and Yardley in a proverbial, ‘Group of Death’ and after six gruelling and fiercely competitive games, it was SSPP who emerged as winners. Joining them in the quarter finals were Yardley as runners-up and, courtesy of goals scored, Timberley (as another best third-placed team).
Group C was similar in stature to group B and though there were the least number of goals scored across all of the groups, it produced no little excitement as Paget, Mapledene, Corpus Christi and St Barnabas locked horns. And it was the holders, Paget who topped the group with Mapledene in second place – sadly though for St Barny’s and for Corpus, they both just fell short in their quest for a last eight berth.
The quarter finals were all closely, well-fought affairs with only Paget cruising into the semi-finals following a 6-0 defeat of Heathlands. SSPP were made to work hard for their 2-0 win over Rosary, whilst Short Heath were pushed all the way by an energetic Timberley as their slender 1-0 win testifies. The final game in the last eight saw a resumption of an increasingly intense A45 derby between Yardley and Mapledene and it didn’t disappoint. After a breath-taking 7 minutes the sides were locked at one apiece which meant a penalty shoot-out was required to find a winner. The Youths prevailed – 2-1 – and headed off to the semi-finals.
So to the last four where Paget met SSPP and Short Heath, Yardley. A by now, purring Paget, made light work of their encounter with their fellow B23ers, SS Peter and Paul – 5-1 the final verdict. In the other semi-final, a depleted Yardley gave Short Heath a much closer game, but the speed and sharp finishing of Heath’s two electric forwards proved too much for the Youths who succumbed to a 2-0 defeat.
The final - oh my days, what a game! Two old rivals, Paget and Short Heath served up a white-knuckle-ride-of-a-game with no end of thrills and spills and more drama than a script writer of Eastenders could ever imagine. Heath took an early lead with a stinger of a long-distance strike, but Paget, smartly, hit back quickly to level. Paget then took the lead but in a game that was played at break-neck speed, you knew it wouldn’t be the end of scoring - and so it proved. Heath levelled following a lovely finish but with just over 90 seconds remaining, and the game ebbing and flowing from end to end, Paget hit the front again and though Heath’s two impish forwards plotted and schemed, they just couldn’t conjure an equaliser and the Trophy was Paget’s again.
A great night’s football, played in great spirit with every child representing their schools with pride and passion – the embodiment of everything the ESPSFA is all about. Hats off to all!