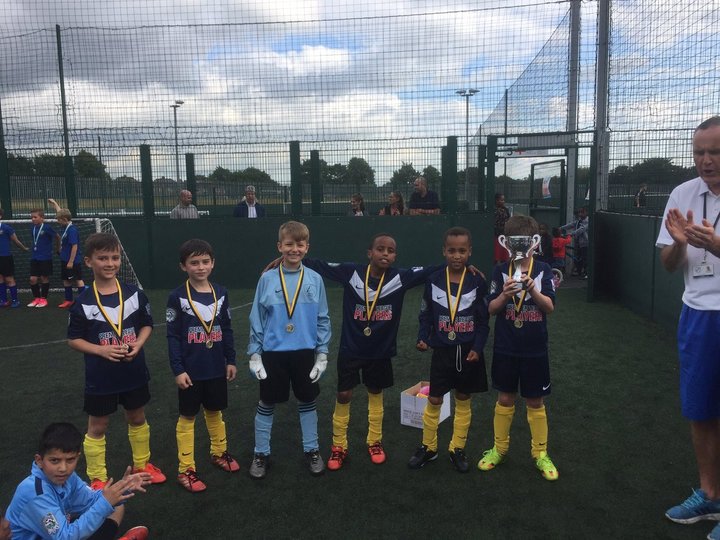 Power League on Thursday evening saw sixteen teams of Year 4 children starting out with hopes of cup glory, but only one could leave with the sparkling new silverware and it was the lads from Glebe - Audley - who stole the show.
Having sauntered through their group, Audley 'A' were pitted against their own school's 'B' team in the quarter-finals, and a 2-0 win saw them into the semis for a showdown with, a hitherto impressive, Lea Forest outfit. The Foresters, runners-up to Abbey in their group, saw off Group B winners Harper Bell, in their quarter final.
Mapledene had made their way to the quarter finals having finished second behind Harper Bell, but they couldn't cope with Abbey's artillery and bowed out, 5-2.
The final last eight fixture saw Group A runners-up, Blakenhale, take on Group C winners, SS Peter and Paul. The Garretts Green side took P&P all the way to a nail-biting penalty shoot-out, and after a prolonged contest in which both sides missed spot-kicks, P&P finally nabbed the last remaining semi-final berth and a derby against old foes, Abbey.
Both semi-finals were one-sided affairs with Audley beating Lea Forest 5-1 and Abbey repeating the score-line.
The final was a ding-dong affair and with a minute to go the game was on a knife-edge with Audley leading 3-2. A clever finish in that final 60 seconds from the Glebesiders, made it 4-2 and left Abbey with no time to recover - cue Audley celebrations.
Another great tournament and many thanks to all the schools that took part - we do it all again next Tuesday back at Power League, Yardley, where boys and girls from Year 5 battle it out for another glittering trophy.